It is not uncommon for those looking to celebrate and honor our fine men and women in uniform that they overlook those who act as soldiers of mercy. Members of the U.S. Army Nurse Corp are primarily responsible for helping take care of America’s sons and daughters. Not only the physical injuries but also the psychological wounds that one can get from battle. The NC, or Nurse Corp, works in support of Department of Defense medical plans by providing qualified nursing staff for all situations.

Nurses have been an important part of the military in this country since before its founding. In 1775, General George Washington requested the Second Continental Congress to authorize formation of nurses to attend the sick and a matron to supervise the nurses. Yet, it would not be until the start of the twentieth century before a real nurse corps was established.In 1901, the United States Congress passed the Army Reorganization Act (31 stat 753) which established the U.S. Army Nurse Corp as a permanent branch of the Army Medical Department (AMEDD). Since the passing of the Army Reorganization Act, the Army Nurse Corp has not only increased in size but in direction. 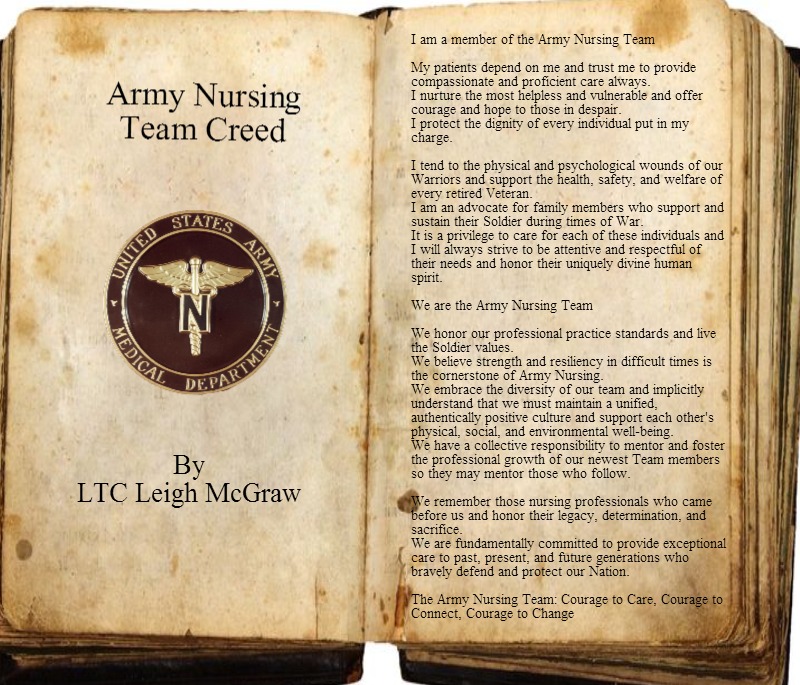 In 1974, the U.S. Nurse Corp became the best educated nurse force in the world as a regulation was passed that placed a minimum of a Bachelor of Science in Nursing degree to join. You will also find plenty of nurses with Master’s or Ph.D. degrees. Today, the Army Nurse Corp is made up of a wide range of nurses specializing public health, clinical informatics, critical care, psychiatric or mental health, emergency care and medical surgical, to name a few.

As you read this, Army Nurse Corp members are stationed all over the world. They participate in humanitarian missions, help military personnel and families cope with tragedy and play an active role in the Global War on Terror. Thankfully they are there helping protect our nation’s protectors.